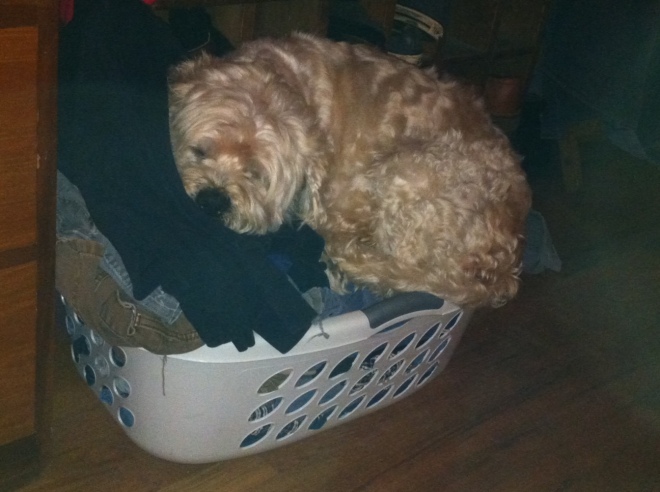 The first week Teddy was at our house, he didn’t know how to negotiate the big dog bed with other dogs in it. So he just made himself comfortable in a clean basket of laundry. How cute is that?

The sad news is, the night before our arranged meeting, Teddy’s awesome prospective adopters decided it wasn’t a good idea for them to adopt him. At ages 68 and 71, their adult kids were concerned Teddy might have health issues down the road that they wouldn’t be equipped to handle.

Although Teddy’s prognosis is excellent and as we all know there are no guarantees about any dog’s future health, these really nice people had already been through their fair share of health issues with their elderly Labradoodle, so I understand their reservations. And I don’t hold anything against them, though I was really disappointed for Teddy. (For the record, I would highly recommend a dog like Teddy to my own parents, who are 76 — though my dad does not go for the fluffy type, nor the mixed breed type, nor the shelter type, nor anything that doesn’t start out in his house as a puppy from a breeder, despite the fact that he overtly cheers my shelter dog fostering efforts).

Before we hung up the phone, the man asked me if I was going to adopt Teddy myself. It’s difficult to explain to people who don’t foster that this innocent question is upsetting. I have no intention of ever adopting any dog that we foster (though it did happen once, with foster #12. Oops). My family has two dogs. We don’t want or need more than two dogs, even as I often fall in love with every shelter dog that comes through our door.

We foster for a variety of reasons, but the main reason is that our shelter has to kill highly adoptable animals every single day because they are overflowing and people will not stop dumping their animals there. Many people here in south Louisiana also won’t (or can’t afford to) spay and neuter their pets or take proper care of them. People across the nation create a market for puppy mills by purchasing dogs from them, and tons of puppy mill dogs end up at municipal shelters like ours too. If my husband and I were to have adopted every dog we fostered, we’d have more than 30 dogs right now, which would make us hoarders.

So no, we have no plans to adopt Teddy. My plan is to find him a loving, devoted home where he can snooze peacefully on a dog bed beside his person making them as happy as he is making me right now. It’s only a matter of time before that will happen. I have faith because I’ve seen it at close range 30+ times. And when it does, I will get that same great high that I always do, and then head up to the shelter and get another.

If you’d like to donate to help dogs at the shelter that stepped up for Teddy, please click http://www.caabr.org/#!donate/ctzx And thank you!

Teddy’s been a good patient who doesn’t seem to mind being doted on one bit.

Teddy’s recovery is coming along much better than I expected. The day after his surgery he was touching his back left toe to the floor. I read online that this wasn’t to be expected until day 10. When we left the shelter, he hopped into my car on three legs, unassisted.

I’m not saying he wasn’t in pain. He surely was, and he cried out now and then, or skittered through the house with his tail tucked between his legs. I tried to comfort him, scratching his neck where I know he likes it and caressing his downy fur. I told him he was a good, brave boy and counted down the minutes until he could have his next pain pill.

The incision looked great to me, so I texted this picture to Dr. Salmon. She texted me right back and said it looked swollen. So I took a deep breath, prepared to be snapped at, and broke out the frozen blueberries to see if he would let me ice it.

Post-operative frozen blueberries help keep the Teddy’s hip swelling down. (He finds this humiliating though and refused to smile for the camera. Nothing personal.)

No problem! He didn’t snap or even growl. In fact, he seemed grateful. It must have numbed the pain.

He’s been going outside on a leash several times per day to potty, mostly hobbling on three legs, but using the fourth leg when I lean on the opposite hip, or walk him in a circle to the left, as Dr. Salmon instructed. At one point, he even seemed as if he was willing to give the neighborhood cat a chase when she was lounging on our front porch. And he hops on and off the sofa pretty easily managing some combination of three or four legs.

But mostly he’s been resting on my lap, seeking comfort. And I can’t say I blame him.

You can help dogs like Teddy by donating to Companion Animal Alliance’s Sick and Injured Animals fund. Thanks for your help! http://www.caabr.org/#!donate/ctzx

On Tuesday, a retired man and his wife who live in New Orleans (and sound lovely on the phone) are coming to meet Teddy. It will have to be a perfect fit all around, and I really hope it is. Stay tuned!

Teddy overlapped at my house with Izzy, a little Jack Russell Terrier  foster who was with us for a just couple of weeks before she was adopted. I kenneled them together at night and they were very snuggly with each other. Who wouldn’t want to help dogs like this?

Dr. Salmon sat on the floor petting Teddy for a few minutes and earning his trust. Then she began to feel his lower back and manipulate his hips. He let her do the right hip without incident, but the left hip sent him flying through the air at her yelping and snapping. (She has excellent reflexes and Teddy didn’t get her. Again, he rushed right in to make up with kisses as soon as her hands were off his hurty hip).

Dr. Salmon suggested an X-Ray to see what was going on and also to see if Teddy was a candidate for a Femoral Head Ostectomy, also known as FHO surgery. This surgery removes the ball-shaped bone at the top of the femur bone if it is grinding into the hip joint and causing pain. The shelter doesn’t have an x-ray machine, however, so I would have to take Teddy across town to a local vet clinic that does. No problem, El Tederino.

Thanks to Companion Animal Alliance Assistant Director Paula Shaw, the cost of the x-ray was covered by the shelter’s Sick and Injured Animal Fund. (If you’re moved by Teddy’s story, and want to make a tax deductible donation to our shelter, they sure could use it: http://www.caabr.org/#!donate/ctzx The sick and injured animal fund helps dogs like Teddy. The General Fund feeds, houses, spays and neuters the hundreds of dogs, cats, horses, pigs, roosters, and God only knows what comes through the shelter doors on any given day. CAA is a municipal shelter and no animal is ever turned away. It is also remarkably underfunded for the sheer number of animals it is tasked with helping.)

I’m no vet, but that left hip looks pretty wack-a-doodle doo, even to me. Also, another of the films shows an old injury to one of the vertebrate in Teddy’s lumbar spine and some arthritis too.

Say it with me: Poor Teddy!

An FHO surgery can range in cost from $1200-$2500, so not many people are looking to adopt a dog who needs one. However, the shelter recently purchased some of the special tools required to do this surgery so that adoptable dogs like Teddy would have a second chance. And Dr. Frederic Michaelson (http://jahvet.com/about-us/meet-our-veterinarians.html), a Baton Rouge veterinarian who also taught at the LSU School of Veterinary Medicine, volunteered his time to supervise the shelter vets who had never done the procedure before. This made it a professional development opportunity for the vets as well. Win/win.

So we scheduled the surgery for the Monday before Christmas, and I was eager to see what Dr. Michaelson would say about Teddy’s hip and his prognosis when he examined him before the proposed surgery. Aren’t you dying to know? You have to be a little more patient while I crank the rest of this story out though. Okay? Okay. Also, a fun fact: Dr. Michaelson is a U.S. Army Veteran, a Louisiana State University alumni, and he was also a starting defensive tackle for LSU from 1967-69. (To be continued…)